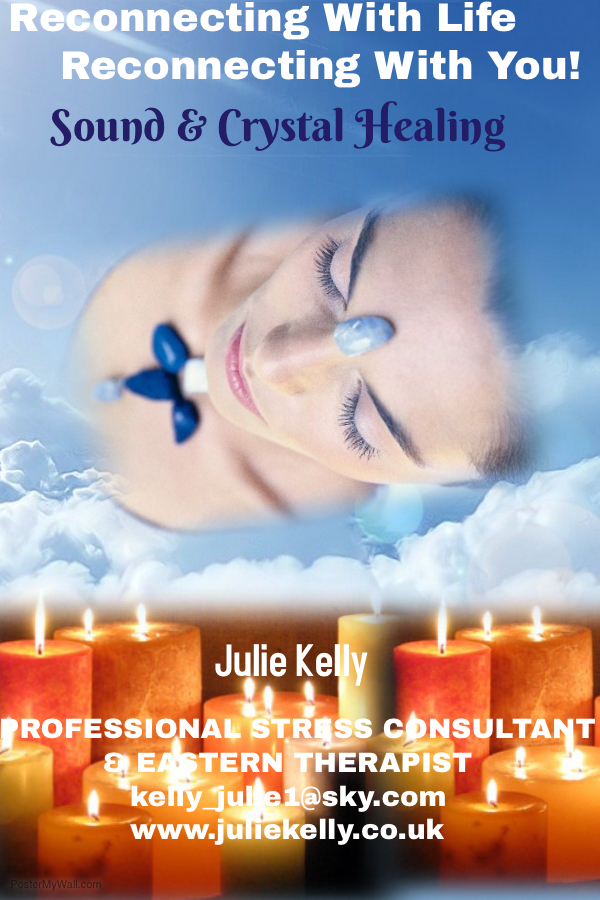 In this wonderfully unique Healing treatment, Massage Therapist Julie Kelly has combined the powerful healing benefits of sound energy with the equally powerful properties of crystals.
Crystal therapy is an ancient healing system which treats patients holistically. By placing certain crystals on relevant body parts and areas of the room, crystal healing can have profound effects.
Unlike Western healthcare (which tends to focus on treating one symptom/ailment at a time) crystal therapy addresses the patient as a whole – paying as much attention to his or her spiritual and emotional well-being as to their physical health. This is also the philosophy of Ayurveda.
There is very little scientific evidence to support the effectiveness of crystal healing on a medical level however, as a Traditional Eastern Healer, the feedback from people who accessed this type of healing has been evidence enough to continue with this practice. Crystals have been used, and enjoyed for many thousands of years – both for their aesthetic beauty and for the peace, relaxation and harmony they seem to invoke.
Crystal therapy is a non-invasive, relaxing, natural and enjoyable experience. It doesn’t really matter whether you believe in the physical healing properties of crystals or not, this type of therapy provides a beautiful opportunity to lie back, relax and get in touch with your body’s energies so you can leave feeling refreshed, restored and de-stressed – a perfect platform for improved physical health.

So how does it work?

It’s understood that Crystal therapy works by communicating with the energies flowing around the human body. The actual formation of crystal is a network of repeating geometric patterns made up of compressed ions, atoms and molecules when examined on a microscopic level. Crystal healing therapy understands that every crystal has its own unique electromagnetic charge & these ‘healing vibrations’ interact with the body’s energy centres to remove ‘blockages’ and restore a healthy flow through the body and mind. The crystals are chosen carefully depending on the person having the treatment and each crystal has a unique healing power. The crystals are then placed on different areas of the body in a grid-like fashion designed to stimulate energy.
Sometimes the colour of the crystal will be chosen to correspond with the colour of each energy point on the body. From the tip of the tailbone to the top of the head the colours are as follows: red, orange, yellow, green, blue, indigo and violet.

History of crystal healing
Crystal Healing dates all the way back to ancient Egyptian times. Though they often used the precious stones for jewellery and cosmetics, they also used them for protection and health purposes, such as the use of topaz for purging evil spirits.
The word ‘crystal’ comes from the Greek word for ice, due to the belief that clear quartz was water so deeply frozen it would remain forever solid. Many other popular crystals also have names of Greek origin, for example ‘Amethyst’ meaning ‘not drunken’ was carried or worn to prevent drunkenness. Greek soldiers were also also known to associate Iron with Mars, the god of war and they would rub themselves in hematite before going into battle believing it would make them better warriors.
As well as playing a central role in the above cultures, crystals have also played a part in a number of religions and faiths and have been mentioned in both the Bible and Koran. In the Koran, the 4th heaven is described as being completely composed of garnet. The Kalpa Tree which represents an offering to the gods in Hinduism is said to be made entirely of precious stone and a Buddhist text described a diamond throne near to the Tree of Knowledge.
Before the advent of worldwide exploration and travel, most civilizations would have been isolated and unaware of the practices of other far-away civilizations. Interestingly, the use and purpose of crystals seems to have transcended geological boundaries. For instance, it is thought that the ancient Chinese, Aztec and Mayan civilisations all used Jade as a stone for healing the kidney, without the knowledge that anyone else was using it for the same reason.
The early 19th century saw a number of experiments aimed at demonstrating the clairvoyant effects of crystals. Though little evidence exists to prove the medical merits of the therapy it is still sought after as a beneficial complementary treatment.
http://www.therapy-directory.org.uk/articles/crystal-therapy.html#howdoescrystaltherapywork

To book your appointment for Crystal/Sound Healing Therapy contact me @ kelly_julie1@sky.com